James Bond parodies – I'm thinking here exclusively of the short stories in magazines and newspapers – tend to explore similar themes. There are those that imagine Bond as an ageing spy, such as Alan Coren's 'Doctor No Will See You Now', which appeared in Punch in 1978, or 'The Scarlet Letter', which was written by Adrian Turner and was included in his 1998 book about Goldfinger.

Then there are the parodies that put the Bond of the 1950s and '60s in the modern world, among them 'For You Mr Bond It's PC Galore', which was published in the Sunday Times in 2006, and 'Martini's Old Hat, Mr Bond. Fancy a Bacardi Breezer?', a piece by Martin Samuel that appeared in the Daily Mail in 2012.

One of the best known parodies is 'Bond Strikes Camp', by Cyril Connelly. In the story, which first appeared in the London Magazine in 1963, M persuades Bond to dress in drag in order to effect a honey trap, but actually takes the role of the target so that he can be picked up by Bond. Another parody in the same camp, as it were, is 'The Spy who Minced in from the Cold' by Stanley Reynolds, which was published in Punch in 1975. The piece took as its starting point an assertion by historian A J P Taylor that Britain's best agents were specially-recruited homosexuals, and consequently re-imagined Bond – and M – as gay.
Disregarding its stereotypical attitudes, the parody shares with most other parodies a number of standard Bondian tropes or memes. There is, for example, Bond's exactness about drinks. “Bond always stipulated Perrier” in his Americanos, and that Bond felt that “a Negroni with Gordon's was the only way to serve it.” (Neither in fact exaggerates Bond's fastidiousness, as both are taken direct from the pages of Fleming.) The story similarly pokes fun at Bond's (and Fleming's) attention to food, as we read about crayfish tails with rice and a cream and dill sauce, a foot of garlic sausage, boeuf Stroganoff, saddle of roebuck with a smitane sauce, and a poisoned Weisswurst (the last used by Bond to kill a Smersh agent).

Then there are allusions to Bondian locations. The line, “St Germain, on the N184 near the junction of the N307 to St Nom and the D98 which Bond always took to avoid the heavy traffic on the Paris-Nantes and Versailles autoroutes,” evokes the French settings of Casino Royale, Goldfinger and 'From a View to a Kill', as well as Fleming's intimate, almost obsessive, knowledge about routes, while the exciting Swiss location and events of On Her Majesty's Secret Service are referenced by Bond recalling “the Gloria Express bob-run.” (This last reference shows just how rapidly snowy landscapes had become closely associated with James Bond, even after a single snow-set novel and film.)

The story ends with M threatening to remove Bond's licence to kill if Bond shows up at the Liza Minnelli Look Alike Contest with the same sort of rhinestone choker that M's planning on wearing. Despite its outdated viewpoints and descriptions, Stanley Reynolds' pastiche treads what would become well-worn ground, but also demonstrates the author's familiarity with the Bond novels. It is perhaps a measure of the success of the Bond novels and films that, forty years on, parodies are still being written and sending up the same tropes.
Posted by Edward Biddulph at 23:23 3 comments:

More ideas in the Bond books that originated with Thrilling Cities

In a recent post I wrote about an idea or meme that emerged in a James Bond novel, in this case the phrase 'quantum of solace', and reappeared in Ian Fleming's Thrilling Cities (1963). The process was more common in reverse. This is evident particularly with the chapter in Thrilling Cities on Tokyo, a city which provided Fleming with a wealth of material that would subsequently be used in You Only Live Twice (1964). But there are other examples.

In his chapter on Geneva, written in 1960, Ian Fleming describes the fields around Noël Coward's chalet in the Swiss Alps as being thick with flowers (it being summer and the time, Fleming notes, of the Narcissus Festival, which celebrates the flowering of the narcissus). In passing, Fleming wonders when an alp becomes a berg. It was a question, slightly modified, that he later gave to Bond in On Her Majesty's Secret Service (1963). “What is the difference between a piz, and an alp and a berg?” he asks Irma Bunt. Not much, it seems, a piz being a local name for a peak, but an alp and berg both being used to describe mountains.

Then, in West Berlin, Ian Fleming enjoys a schnapps with a beer chaser known as Molle und Korn, or a 'boiler-maker and his assistant'. James Bond has the same combination (described as Molle mit Korn) when he's in Berlin ahead of his rendezvous with 'Trigger' in 'The Living Daylights', first published in 1962.

The short story '007 in New York' was originally published in 1963, three years after Ian Fleming's report on his visit to New York appeared in The Sunday Times. In that piece, Fleming claimed that creamed oyster stew, served at Grand Central Station with crackers and a Miller High Life beer, was the only dish that had maintained its integrity in New York. James Bond expresses similar views in the short story, musing about the “best meal in New York – oyster stew with cream, crackers, and Miller High Life” at Grand Central.

Anyone interested in the origins of ideas and memes in the later Bond books would not have to look very far in Thrilling Cities before finding them. Some of the experiences Fleming had while visiting cities around the world he would give to Bond. After all, the thrilling and intriguing aspects of Fleming's visits were natural material for Bond. But the experiences Fleming had, which he recorded with his journalist's eye, also give the Bond books a sense of reportage and reality that still make the books so compelling to read.

Blofeld's cat in the Bond films and beyond

There's a moment in Spooks: The Greater Good when MI5 agent Will Holloway, played by Kit Harington, enters the house of a suspected villain and is confronted by a white cat. Will quips that they've got their man, alluding to the white cat associated with James Bond's arch-nemesis, Ernst Stavro Blofeld.

Since making its first appearance in From Russia With Love (1963), Blofeld's cat (we never find out its name) has become a well-established meme in popular culture, eliciting recognition even without the appearance of Blofeld or Bond, and providing useful shorthand in television or film dramas for villainy, usually of the grand, international kind.

The Blofeld of Ian Fleming's novels does not own a cat. Goldfinger does, but his is ginger (as befits a man obsessed by gold), not white. Blofeld's cat was, then, an invention of the screenwriters of From Russia With Love, principally Richard Maibaum (although there is something of an older tradition of cats associated with villains; as @craigarthur_nz reminded me, the criminal mastermind Dr Nikola, created by Victorian novelist Guy Boothby, had a black cat named Apollyon). Given that we do not see his face, Blofeld was presumably given a cat to make the shots of his lower body and lap more interesting for the viewer (and dignified for the actor, in this case Anthony Dawson), but in so doing the screenwriters also created a visual symbol of Blofeld and, by extension, (renewed) a symbol of nefarious activity.
The cat itself is a traditional Persian, a long-haired breed that accompanies all subsequent screen appearances of Blofeld, including For Your Eyes Only (1981) and Never Say Never Again (1983). With the hint that Blofeld will return in Spectre (2015), there is a chance that the cat will return too (will a white cat herald the presence of Blofeld before Blofeld is himself revealed?). If the makers of the forthcoming Bond film rely on recent representations of Blofeld's cat, however, we could be seeing a different breed.

The meme of Blofeld's cat has been imitated almost from the moment that the cat first appeared in the Bond films. For example, in Bruce Lee's Enter the Dragon (1973), a film that copies many traits of the Bond films, crime lord Han is seen carrying a white cat, apparently also a traditional Persian. In Austin Powers (1997), Blofeld-like character Dr Evil has a traditional Persian cat at the start of the film.

A more recent allusion to Blofeld's cat is in the film Cats & Dogs (2001), which features as its villain a white cat called Mr Tinkles. The cat instantly recalls Blofeld's cat and identifies the character as villainous, but curiously the breed is a modern Persian, not a traditional Persian of the Bond films, the difference being that the modern Persian has a flatter face. 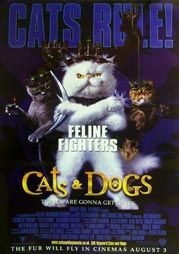 It is this modern Persian that appears to have been depicted in The World According to Blofeld's Cat: Unofficial Musings from the Volcano Lair (Tumbleweed, 2015), an amusing book in which Blofeld's Cat offers the sort of provocative opinions about subjects as diverse as selfies, call centres, public transport and musicals that many of us are probably thinking but dare not say!

Whether the next incarnation of the screen Blofeld's cat is the modern, or the traditional Persian remains to be seen, but thanks to the success of the early Bond films and regular appearance in later, non-Bond films, the cat is likely to remain an important symbol of on-screen villainy for some yet.
Posted by Edward Biddulph at 21:13 2 comments: