Who was the real James Bond? 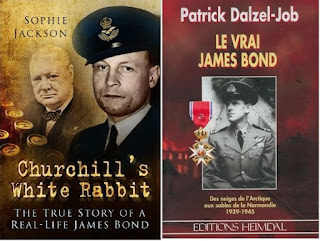 Over the years, there has been no shortage of speculation about which commandos Ian Fleming meant when he said that James Bond was 'a compound of secret agent and commando types I had met [during the war]'. Among the usual names linked to Bond are Fitzroy Maclean, Patrick Dalzel-Job, Conrad O'Brien Ffrench, and Dusko Popov.

To this list we can add Forest Yeo-Thomas, whom Sophie Jackson in her 2012 book, Churchill'sWhite Rabbit, has claimed was the real inspiration for Bond. As with the others, the evidence is at best circumstantial, but what is perhaps of more interest in this and other cases is the way that the perceived connection, however tenuous, provide selling points for books about the individuals.

It must be said that the wartime exploits of Forest Yeo-Thomas – a member of the Special Operations Executive (SOE) who was parachuted into occupied France, captured by the Gestapo, imprisoned at Buchenwald, and made a daring escape – are the very stuff of Bondian-like adventure. What's more, Ian Fleming was aware of them.

During her research into Yeo-Thomas, Sophie Jackson uncovered a top-secret letter written in May 1945 by Fleming in which he expressed his happiness on learning that Yeo-Thomas, after being sent on his mission, was still alive and had escaped, and his thoughts about the publicity value of Yeo-Thomas' remarkable story.

While the letter proves that Fleming knew Yeo-Thomas and his exploits, it does no more, and the evidence Sophie Jackson offers in addition to the letter to suggest that Yeo-Thomas was the inspiration for Bond – Yeo-Thomas' capture, torture, and escape is worthy of Bond, as is his apparent popularity with women – is hardly conclusive.

But that's firm enough evidence for Sophie Jackson's publisher, The History Press, who makes the most of the connection. The book's subtitle is 'The true story of a real-life James Bond', while associated publicity states that the book reveals how Yeo-Thomas 'provided the inspiration for Ian Fleming's famous secret agent, James Bond.'

In that regard, the book is in good company. The subtitle of the 2002 edition of Patrick Dalzel-Job's autobiography, From Arctic Snow to Dust of Normandy, is 'The war memoirs of the real James Bond'. (This is retained in the French edition, though the Bond connection is emphasised: Le Vrai James Bond. Des neiges de l'Arctique aux sables de la Normandie 1939-1945.) The back cover blurb of Penguin's 2009 edition of Fitzroy Maclean's classic Eastern Approaches begins, 'Fitzroy Maclean was one of the real-life inspirations for super-spy James Bond'. The back-cover text of Russell Miller's 2005 account of Dusko Popov, Operation Tricycle, is more cautious but mentions James Bond all the same.

As Henry Chancellor suggests, there is probably more of Ian Fleming in James Bond than any one commando (and to my mind, judging by statements made by Fleming and the style of the Bond books, a good dash of American private-eye thrown in for good measure). Nevertheless, the link between numerous wartime heroes and Bond remains strong, thanks in part to publishers' copy-writers and continued interest in the role of secret agents and commandos in the Second World War.

Chancellor, H, 2005 James Bond: The Man and his World, John Murray
Macintyre, B, 2008 For Your Eyes Only: Ian Fleming and James Bond, Bloomsbury
Posted by Edward Biddulph at 21:28 No comments:

In addition, the bar's logo has a hint of the heraldic-like artwork used for the marketing of the film, comprising as it does a coat-of-arms-style device of a crowned medallion containing the name of the bar, and flanked by two birds.

The drinks offered on the menu (nicely designed to resemble a passport and available online) are a little unusual – there is no vodka martini in sight – but patrons looking for a Bondian drink could choose a Mojito (which Bond drinks in Die Another Day), an Old Fashioned (ordered by Bond in the book of Live and Let Die), or a Mint Julip (a cocktail which Bond accepts from Goldfinger). ,

If those don't appeal to you, then how about a boiler maker – a shot of spirits followed by a beer – which is also on the menu? Bond goes for a boiler maker (in his case a schnapps washed down with a Löwenbräu) in the short story, 'The Living Daylights'.

The second company is the UK pie-sellers, Pieminister, whose tasty pies are available in pubs, restaurants and by mail-order. At one pub, the words 'Live and Eat Pie!' were spotted on a Pieminister menu. This exhortation is clearly a play on Live and Let Die, and provides further evidence that the title of Live and Let Die is a hugely successful meme, being memorable and adaptable and deeply embedded in popular culture. 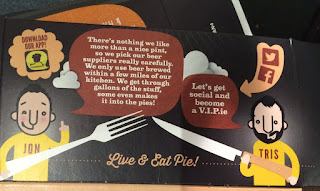 Dining out with Bond and Marlowe 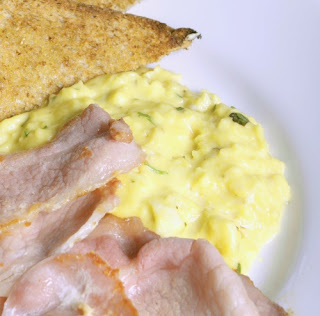 He went into the kitchen and cooked himself Canadian bacon, scrambled eggs and toast, washed down with coffee. James Bond having a spot of breakfast? Actually, no. This is a breakfast consumed by Raymond Chandler's dogged and wise-cracking private eye, Philip Marlowe. But it could easily have been Bond's breakfast too, bacon, coffee, and in particular scrambled eggs being Bond's favourite. Only the cooking separates the two heroes; Bond has a housekeeper for that.

Re-reading Chandler's 1953 novel, The Long Good-bye, I was reminded how large a role food plays in the Philip Marlowe mysteries, almost rivalling the Bond books for food mentions and descriptions.

In the same book, while investigating the murder of a wealthy socialite, the apparent suicide of the only suspect, her husband, and babysitting an alcoholic author, Philip Marlowe consumes more Canadian bacon for breakfast, a chicken salad sandwich lunch, and evening meals of hamburger, mashed potato and onion rings, and prime ribs and, somewhat incongruously, Yorkshire pudding.

It's clear from interviews with Ian Fleming that James Bond owes his origins in part to the tradition of hardboiled detective fiction, particularly that of Dashiell Hammett and Raymond Chandler. The last two thirds of The Spy who Loved Me is pure American pulp-fiction (in the best possible way), and generally the action, spare prose, and dry humour (yes, there is some) of the Bond books wouldn't be out of place in a Chandler novel. To that list we can add food descriptions, which offer another point of similarity.

Being a relatively frequent visitor to the US – though not to California, where Marlowe plies his trade (at least not in books; Bond does travel to California in the 1985 film, A View to a Kill) –  Bond would be familiar with Marlowe's food choices. In Live and Let Die, Bond eats a charcoal-grilled hamburger and has a breakfast of scrambled eggs, bacon, toast and coffee at his New York hotel, and orders a chicken sandwich during his rail journey to Florida. In Miami (Goldfinger), Bond enjoys roast prime ribs of beef. Admittedly, Bond doesn't eat Yorkshire pudding in the US or elsewhere for that matter, but he does have a passing thought about toad-in-the-hole, which uses the same batter recipe.

Given their shared tastes, someone really ought to get Marlowe and Bond together for a dinner date. Now that's a parody waiting to be written. Thinking about it, we already have an idea of how that might look on the page. The Bond books feature a laconic private detective, Bond's friend and comrade-in-arms Felix Leiter (who, by his second appearance, is a Pinkerton's agent), with much of Leiter's time spent, it seems, in restaurants and bars.

Not only does Felix Leiter know his food, but he also has his fair share of wisecracks. In Diamonds are Forever, before entering Sardi's, where Leiter introduces Bond to brizzola ('Beef, straight-cut across the bone. Roast and then broiled. Suit you?'), Leiter quips that in Texas, 'even the fleas are so rich they can hire themselves dogs'. Philip Marlowe would be proud of that one, and would no doubt enjoy dining at Sardi's too.
Posted by Edward Biddulph at 20:56 2 comments:

I was interested to learn recently of the history of Q Central, a British wartime establishment that was just as secret and vital to the war-effort as the code-breaking base at nearby Bletchley Park. What is especially intriguing is the likelihood that Ian Fleming was well-acquainted with the operations of Q Central and its satellite units.

Q Central was based at RAF Leighton Buzzard, a purpose-built station on the edge of the Bedfordshire town. Its importance cannot be overstated. The station served as the communications hub for all radio signals produced by the RAF, navy and army, and those of MI5, MI6 and MI8, as well as other secret units. Operators there also intercepted German radio traffic, which was then forwarded to Bletchley Park, and were responsible for transmitting coded messages and misinformation. It also operated, at the time, the largest telephone exchange in the world.

As personal assistant to the director of Naval Intelligence Division (NID), Ian Fleming would have been well aware of Q Central. He is likely to have known that signals sent by the Admiralty were routed through Section 2 of Q Central, and he was a regular visitor to other establishments in the area that were linked to Q Central.

One of these was, naturally, Bletchley Park. Another, perhaps lesser-known, location was Milton Bryan, a village eight miles north-east of Leighton Buzzard. This was home to the Political Warfare Executive (PWE), Britain's 'black propaganda' unit. Led by Sefton Delmer, a Daily Express journalist and friend of Ian Fleming, the unit recruited writers, foreign-language speakers, PoWs, and forgers to create and transmit material designed to demoralise the enemy.

Much of the information that formed the basis of radio broadcasts directed at the German navy was supplied by the NID. Ian Fleming, along with NID colleague Donald McLachlan, even set up two radio stations, which, from Milton Bryan, transmitted demoralising information to U-boat crews.

Fleming often visited the studios to see the work of the unit first-hand, and when broadcasts of propaganda to what had been occupied France ceased in April 1945, Fleming joined members of the PWE at Milton Bryan for an end-of-operations celebration.

The PWE at Milton Bryan was one of a number of secret and otherwise special establishments in the area, including No. 60 (Signals) Group, which operated radar stations, the Met Office, based at Dunstable, and USAAF Cheddington, whose crews flew sorties to drop propaganda leaflets. At the heart of all this activity was Q Central.

Given its name, and Ian Fleming's connection to the area, it is tempting to link Q Central with Q Branch of the James Bond books. There is no suggestion in the books that Q Branch was based on the wartime establishment – the role of Q Branch is one of supply, gadgets and equipment, rather than communications – but it's possible that Fleming had Q Central in mind when he came up with the name (it should be remembered that there is no Quartermaster in the books). This is, of course, highly speculative, but it seems just as likely as the alternative hypothesis that the name of Q Branch derived from the Q ships of the First World War.

References:
Brown, P and Herbert, E (eds), 2014 The secrets of Q Central: How Leighton Buzzard shortened the Second World War, The History Press
Lycett, A, 1995 Ian Fleming: The man behind James Bond, Turner
Posted by Edward Biddulph at 20:13 No comments: