Interviews about James Bond – a review of two recent books


Books in which the authors talk to people about James Bond are like buses. You wait ages for one, then two show up at once. The first to arrive, slightly ahead of the second, is The Many Lives of James Bond: How the Creators of 007 Have Decoded the Superspy, by Mark Edlitz. The second is Nobody Does it Better: The Complete, Uncensored, Unauthorized Oral History of James Bond, by Mark A Altman and Edward Gross.

Mark Edlitz’s book is the slimmer of the two, but is no less interesting or insightful. The book contains interviews conducted by the author with individuals who in one way or another have created incarnations of James Bond or otherwise interpreted the character. In the book, you’ll find interviews with film directors (such as Martin Campbell), writers of Bond stories (Anthony Horowitz and Mike Grell), illustrators (among them John McLusky and Dan Goozee), computer game designers (Glen A Schofield), and, in a series of particularly absorbing interviews, people who have actually been Bond in some way, including Corey Burton (James Bond Jr), Dietmar Wunder (the German voice of Daniel Craig) and Simon Vance (audiobook reader).

These are fascinating interviews. We get a wonderful sense of the craft required to create aspects of James Bond and the professionalism of the individuals concerned. Take the author’s interview with Jany Temime, for example. We learn that the clothes worn by Daniel Craig’s Bond when he arrives at Skyfall in the film of the same name were designed to evoke the gentleman farmer, as befitting the owner of a country pile, while Bond’s scarf was based on that worn by Field Marshal Montgomery. I’ll never look at the costumes in the films in quite the same way again.

And we get the definitive answer to a question that until now as never been fully resolved: are the lyrics to Thunderball about James Bond or the villain? Lyricist Don Black is unequivocal: James Bond. (I still feel, though, that they suit the villain better. I’d also like to add that the word ‘thunderball’ isn’t entirely meaningless, as is usually implied – it refers to the mushroom cloud created by an atomic bomb.)

Returning to the book, what is less successful, I feel, is the author’s attempt to gain insight through these interviews about the character of James Bond himself and find out what makes Bond tick. Questions about what motivates Bond (which Bond? There have been so many), whether Bond would still be Bond were he not a spy and other, similar questions, though philosophically interesting to an extent, seem tacked-on, while the answers are somewhat unconvincing.

Nevertheless, the book is a page-turner and deserves a place in every Bond fan’s bookshelf.

Altman and Gross’s effort is a somewhat different beast. Within the sizable tome (over 700 pages), the authors have assembled a comprehensive selection of quotations from many of the people connected with the James Bond films. Much of the content is based on interviews conducted by the authors, but the book includes material taken from other sources. 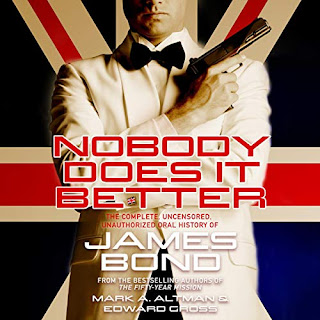 Arranged by film, including the two non-EON productions, the book takes a look the scriptwriting, casting, filming, publicity and reception of each release through the eyes of the people who were involved – directors, producers, actors, screenwriters and so on. The authors also talk to critics and popular culture commentators, who place the films in context and offer views on the impact that the films have had on them and society more generally in subsequent years.

The authors provide some linking text, but most passages are without any introduction or commentary. While this certainly gives readers a sense of that the views expressed are uncensored and ‘from the horse’s mouth’, the approach taken does present some difficulties. The historian, for example, might bemoan the lack of dates and sources. Which passages are taken from original interviews and which are reproduced second-hand? What are the dates of the quotations? Are they contemporary with the events being described or were they said years later? If the latter, might there be an issue with reliability? Sometimes we are presented with contradictory statements and, even after reading the various passages, remain none-the-wiser about the truth. (Were George Lazenby and Peter Hunt on speaking terms during the filming of On Her Majesty’s Secret Service or not? It seems we will never know.)

More serious is the absence of editorial intervention where what has been said is just plain wrong. Terence Young’s assertion that Ian Fleming died during a swim, hinting heavily that he committed suicide, is factually incorrect and should have been challenged by the authors, at least by way of a footnote.

All that said, the book is an invaluable sourcebook of views and facts from the people who were closest to the production of the Bond films. The authors are to be congratulated for assembling such a useful resource. This is a book designed to be savoured, to dip in and out of, ideally with a vodka martini by one’s side.
Posted by Edward Biddulph at 16:29 No comments: